Apple will hold its annual WWDC event on June 13 next year. At this event, it will introduce the new iOS, iPadOS, MacOS, watchOS operating systems. After the introduction, those who want can install beta versions of this operating system on their devices. If you do not know how to install a beta profile, you can learn from this article. (iOS 16 Beta Profile Download). With the iOS 16 beta profile, you can test the new iOS version before anyone else. It does no harm to your device.

Many devices will not be supported with iOS 16. Apple has been supporting the same devices for 2 years, but this will change with iOS 16. iPhone 6S, 6S Plus and SE (1st Gen) will no longer be supported. We have come to the end of the updates for the iPhone 6S, which has been supported since 2015. The fact that it has received updates for such a long time shows how high quality work Apple has done. Below is the list of devices that support iOS 16:

Apple will not update many iPad models with the iPadOS 16 update. These are the iPad Air 2 released in 2014 and the iPad Mini 4 released in 2015. These two devices have maintained their popularity by receiving updates for many years. But with iPadOS 16, they will no longer receive updates. Below is the list of devices that will receive the iPadOS 16 Supported Devices update: 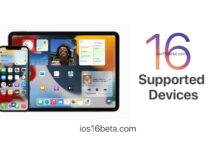